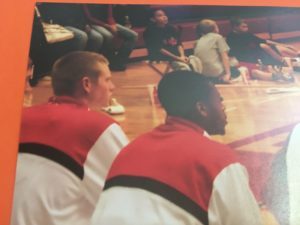 Derek’s second season started out on the right foot.  By the end of January the team was 14-8.  They had already doubled the amount of wins from last year.  I could already tell the atmosphere around our house was so much better than it was this time last year.  I was ready to throw in the towel this time last year.  I felt trapped, I wanted out of the coaching business, and I was sick of the winter in Michigan.  See what winning can do to a person!  Now I didn’t feel so trapped, I had optimism that the windows of opportunities would open for Derek since the team had such a big turn around and if possible, the winter didn’t seem all that bad this year.  Then the roller coaster ride began.  The team proceeded to lose five of their next six games.  We were back to mediocre and I could see that window of opportunity closing.  At this point I was hoping that we would at least finish better than .500.  Derek hasn’t been on a team that has finished better than .500 in over six years.  It is hard to move up the coaching ranks when you lose more games than you win year after year after year.  That is why every win became so important and every loss became a dagger because wins were our ticket to opportunities and losses were the cement that didn’t let us move forward.

In the matter of a week and a half the team went from second place to seventh place in the conference and I hated the winter again.  It was amazing how quickly the mood in our house changed after those losses. But what goes down must come back up!  Just as I had written off the entire season the team rallies and wins five of the last six games of the season.  Two wins of which were in the conference tournament where they ended the season losing in the semifinals.  Their record for the season was 20-14.  Anyone who knows college basketball knows that 20 is the magic number.  Achieving 20 wins is like being on the dean’s list.  It sets you apart from all the other teams that had winning records.  Numerous teams can win above .500 but only the best make the dean’s list.  In one year’s time they had a 13 win turnaround.  That is quite an accomplishment.  The team ended the season on a high note and Derek ended the season with a roomful of possible opportunities.  Not only was he a part of one of the biggest turnarounds in college basketball that year but he was also named the #1 Top Mid Major Assistant of the year by Hoop Scoop, an internet recruiting service.  Now, we wait for that March/April coaching carousel to start spinning.  Maybe something great will come our way or maybe not.  But at least there is a chance and that is all I ever wanted – a chance.