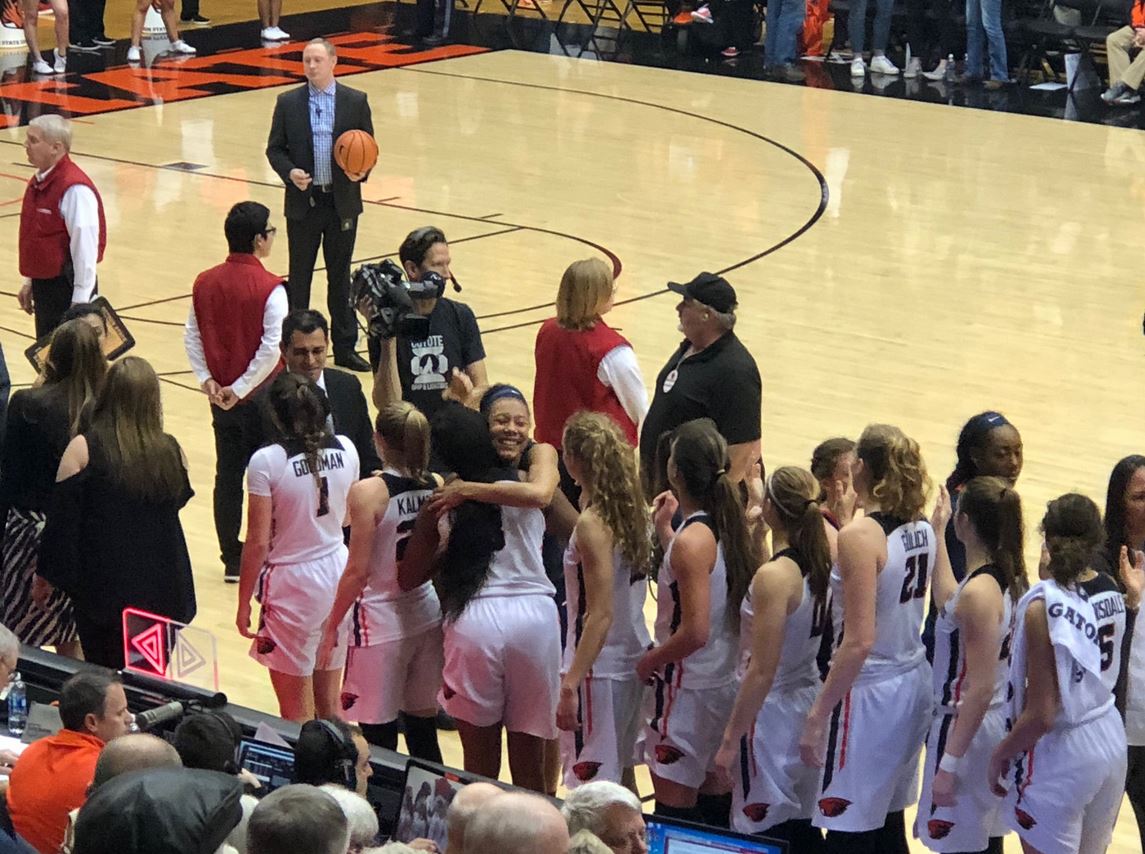 The Horizon League Championship game was at Valparaiso and it just so happened we were playing Valparaiso therefore they had home court advantage.  The kids and I hopped on the Fan Bus that left campus the morning of the game.  It was about a 4-5 hour drive and the bus was jumping with excitement for the big game.  Everyone in the arena, except the few hundred fans that rode the Fan Bus, was rooting against us that night.  It was a great game (it is always a great game when you win).  There was a time towards the end of game when I knew we were going to win and I could feel the tears running down my eyes.  Derek had worked so hard and put up with so much this year and to see it finally pay off brought tears to my eyes.  He finally got some justice.  My kids ran onto the floor after the buzzer and dove on their daddy – I was still in my seat crying.  Such a great atmosphere!  We stayed on the floor until they kicked us off.  It was finally nice to see Derek happy!  It had been a long time since I had seen him happy.  This is the first time he had ever won a conference tournament.  We were going to the Big Dance!!  I know deep down Derek was thrilled, not because they won, but because everyone had told him that the reason he wasn’t getting any jobs was because he hadn’t been to the tournament in so long and now he checked that box.  There is no stopping him now.

The kids and I had to get back on the Fan Bus after the game and head back to Detroit.  There was no sleeping on that ride home because everyone was so energized!  We arrived back to campus around 5:00 am.  For some reason my over achieving children wanted to go to school so I took them home where they got about 45 minutes of sleep and went to school.  I think they were still on an adrenaline high and they wanted to go to school to brag about their dad!

There was a party on Selection Sunday.  We were going to see what our seeding was and who we were going to play in the first round.   Drum roll please . . . We are a 15 seed and we play Kansas at the Omaha, Nebraska site.  I thought it was quite ironic because Kansas had always been Derek’s dream job and now he has a chance to play them on the biggest stage.  There are always upsets in the tournament – that is what makes it so fun!  To see these small schools knock off Goliath is a rush.  Everyone loves the underdog!  Detroit was certainly the underdog.  I love my husband and I believe miracles do happen but I am also a realist so I turned down the opportunity to ride the Fan Bus 14 hours with my 4 kids which was going to turn around the next day and drive the 14 hours back if they lost.  Is that being an unsupportive wife?

Well, as statistics have it, the number 15 seed did not beat the number 2 seed.  Detroit hung with them for the first 10 minutes but then Kansas’s size and strength took over.  It was a tremendous season for the team and it gave Derek back his confidence.  He now had the credentials to move on to bigger and better things and to get the heck out of the insane asylum.