If Mama Doesn’t Do It No One Does 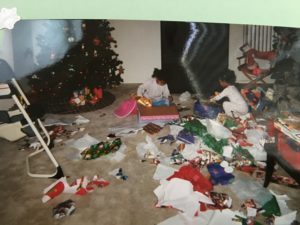 If Mama Doesn’t Do It No One Does

I think I developed a slight case of obsessive compulsive disorder after I had children.  I became obsessed with organizing and cleaning.  It wasn’t a germophobe thing.  I am the first to admit that there have been times I cut the moldy part off a loaf of bread and fed the rest of the loaf to my children without their knowledge (that is where penicillin comes from, right? So a little mold spores couldn’t hurt).  So, it was not mold, dust mites, or parasites that caused my obsession.  Instead, it was this lingering feeling of having a “to do” list hanging over my head.  I knew if I didn’t pick something up or put away something it would still be there the next day and the next day and so on.  The clothes in the dryer would still be there, the empty juice pitcher would still be in the sink, the dishwasher would still be dirty, the dust would still be on the television, and the Christmas lights would be up all year.  I often wondered as I was hanging up or taken down the Christmas lights, “ if a mom fell off the roof while hanging Christmas lights and no one was around would it make a sound?”

It is nice to get a break from the compulsion and I usually get that break when I visit my parents.  When I visit my parents I let things go a little longer because someone else (my mother, definitely not my father) might pick it up or wash it, or put it in the dishwasher.  As sad as it may sound, it is a freeing experience to leave a cup in the sink and come back a few hours later to find someone else has cleaned it for you.  Now I know how my husband feels.  It sure feels nice to have someone clean up after you.  I have to say since my husband did live on his own for a while before we got married he is pretty good about cleaning up after himself and he too likes a clean house.  He would have no problem picking up a broom or wiping down a table.  He just does little sneaky things that he doesn’t know I know about.  For instance, he will drink the entire pitcher of iced tea until there is just a spit left and leave it for someone else to drink.  He does this not because he is thoughtful but because he doesn’t want to be the one to empty it therefore the one who has to clean it.  Or he uses the old “I didn’t know” act.  Why didn’t you change the light bulb?  “I didn’t know it was out”.  You mean to tell me you didn’t notice the light bulb that you look at every day in our bathroom was no longer illuminating the room?  Why didn’t you wash the car?  “I didn’t know it was dirty”.  You don’t see the “wash me” sign someone wrote on the back of our car?  Do husbands really think we are that stupid?

Subsequently, I have become a little obsessive compulsive with an orderly house.  But I find a house in order leads to a life in order.  I keep my house simple and clean which leads to a life less chaotic.  I had a friend in Atlanta who had four kids and lived in a $500,000 house.  The house was beautiful on the outside but the inside was pure chaos.  There was laundry, toys, dirty dishes, books, crafts, and groceries everywhere.  Nothing had a particular space where it belonged.  She was a very nice person but I always remembered feeling uncomfortable when I went over to her house because I couldn’t relax with all the clutter around me.  She told me one day (before she had seen my clutter free home), “If you have a clean house you are boring and don’t spend enough time with your kids because you are too busy cleaning.”  It did make me think that maybe I wasn’t spending enough time with my kids because I kept a clean house and there were times that I cleaned instead of played with my kids.  But spending a day at her house changed my mind right back because in the few short hours I was there she had forgotten that one of her kids had clarinet practice, couldn’t find the clarinet, there were ants crawling on a piece of food in the corner and one of the kids tripped on a toy and fell down the steps.  From that moment on I never questioned my parenting skills based on the condition of my house.